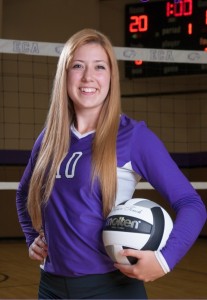 Hannah Wyngarden signed her National Letter of Intent on Tuesday at Elkhart Christian Academy in front of a crowd of her peers. She will be continuing her volleyball career at Montreat College located in Montreat, North Carolina.

Hannah has had a tremendously successful career while at Elkhart Christian. She lettered all 4 years in volleyball and added 2 more letters in Track. She was voted as Team Captain both her junior and senior years in volleyball. Hannah was awarded Best Offensive Player her sophomore, junior and senior years and following her senior season, she was named to the Indiana North/South and the Indiana East/West All-Star teams. Hannah is currently playing for the Dunes Volleyball Club 18 Black Team.

In addition, Hannah has earned a place on the Honor Roll, spent 4 years of Presidential Service and has participated in Student Government.

We are truly proud of all of Hannah’s accomplishments and how she has represented Elkhart Christian Academy.